Interviewed by Emma Slocombe and Veronica Walker-Smith in 2016 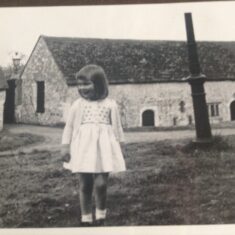 Sarah Sackville-West, aged two and a half, at Knole 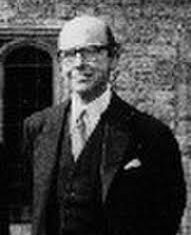 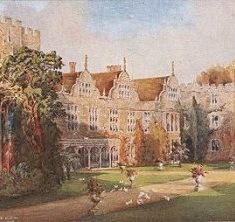 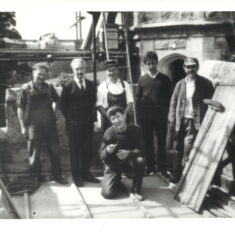 Fred Piercy and Vic Peck (standing, second and third from left) in 1968 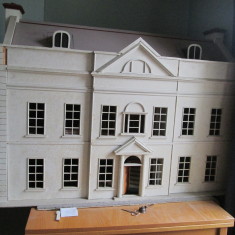 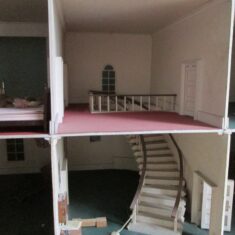 Sarah recalls her earliest memories of growing up at Knole,  her childhood playing with her four sisters and five cousins. She also shares her favourite memories of interacting with Knole Estate staff and the most wonderful birthday present of a bespoke dolls’ house commissioned by her mother.

Interviewer: I wondered if you could give us something of the flavour and spirit, of life at Knole when you were growing up there with your parents and your sisters.

S.R.: Well I suppose one of the things about growing up at Knole – though this of course is something one sees in retrospect – is we were very isolated.  One lived in this vast, great house, and we didn’t really have friends up to play, that I remember much, partly because we were quite self-sufficient.  There were five of us, and then Huffo (our uncle Hugh and aunt) Bridget, with their five, moved into the North wing when we moved into the South, and so there were 10 children rattling around actually; getting on; fighting; doing all the rest of it.  So we had enough contemporary relationships.  And my mother, I do remember being absolutely horrified, because I think I said to her when I was about six, “I see no point in having any friends!”  And she said, “You can’t say that!”

Actually, the fact of the matter was, that there was enough to occupy our time.  Although we all went through – as all children do – periods of great boredom.  But there was an awful lot to get up to, if you like, at Knole.

And we had the run of the place, which was tremendous, because – no health and safety; far too big for us to be supervised!  And we made great friends with lots of people who were working there, because Knole then – I remember it very clearly – as being very largely self-sufficient.  Of course there was a tremendous amount of work; probably largely orchestrated by the National Trust.  But there were carpenters, plumbers, there was a wonderful man called Vic Peck, who was responsible for doing all the lead work – restoring all the lead work.

Actually, we must have been complete nuisances, because we would tag on to these people!  I think they probably did occasionally just tell us to go away, because it was informal.  There was no tremendous great hierarchy.  It wouldn’t have occurred to them, or to us really.  They were friends.

I spent a lot of time, for instance, in the carpenters’ shop, hammering nails into planks of wood, which was meant to be a boat.  I only liked doing rigging, which of course would instantly sag, but then I would go next door into the paint store, and with the help of the painters, paint it impossible colours.  All that sort of thing, well it was like having a huge great nursery, in lots of ways, from when we were very young.

Animals played a big part in our childhood, actually, we had lots of them, of all shapes and sizes.  And we did once have six dogs: two Newfoundlands and four Border Terriers.  And then Teresa, my eldest sister, had a flock of white Fantail pigeons; which looked wonderful in the evening sun.

Interviewer: And you mentioned that you enjoyed riding when you were young, for a brief moment.

S.R.:  Well I carried on, because I think it was expected.  But yes; it was wonderful being able to ride in the park, although riding isn’t all wonderful; you have to exercise the horses and it always happened terribly early in the morning, and it could be terribly cold.  And I’ll never forget that awful – we weren’t kitted out as it were – that awful feeling of very wet jeans chafing at your legs.  And real misery actually; so it wasn’t all fun.

Interviewer: You mentioned you were captured on film.

S.R.:  Well that was a series of television programmes, made by Granada; I think it was called “A Place in the Country”.  And I don’t know which the other houses were, but Knole was one; and Jo Grimond came to interview my father, and we were included, well, to a degree.

And then, Victoria and I were filmed galloping down the Gallops, which was just tremendous fun, because our fat, old ponies were always breathless and unfit and all the rest of it; and so were thwacked on their rump, quite hard, and did a mini bolt. And that was heaven, because it really was going fast, for a short while!  But that was what I wanted to do.  But riding was lovely, because one knew the park pretty well, and you learned to jump over fallen trees, not over boring little made-up jumps, and things like that.  No, it was lovely.

Interviewer.: Perhaps we could just have a little bit about the dolls’ house, as you’re going to show it to us.

S.R.:  Oh, the doll’s house.  Well that has to be the envy of everybody; and made by Mr – he was Mr Piercy – he was very, very much Mr Piercy.  And he was a craftsman beyond all craftsmen, I think.  He was a very skilled, and I imagine a very good foreman.  I’d always longed to have a dolls’ house of my own; and I think it was my mother who realised what kind of dolls’ house it should be, for me.  And I think it was probably his biggest triumph of something, which he ever made.  And it is beautiful!  The details are extraordinary; and this wonderful curved staircase, which he did – I can’t remember what you do to wood to make it bend, but it’s very skilled; very fine banisters; and the fireplaces are all made.  And the outside – the façade, is all beautifully inlaid and so meticulous.  And so lovingly made.  And you feel that with that dolls’ house: it’s made with love.

Interviewer:  Can you remember when you were first given it?

Interviewer:  Because it must have been a big moment?

S.R.:  It was huge!  But of course, it is a very big dolls’ house; so it was covered up with a vast curtain.  And my mother was absolutely beside herself with excitement; because she had obviously been privy to the whole creation of this thing.  And I remember the thing being taken off, and just – well, absolutely speechless!  Couldn’t believe it, really couldn’t believe it.  I think it was the first thing – in my memory – which was so completely mine; and so unique: no one ever had, and never will, have a toy like that.  It beat Queen Mary’s into a cocked hat, as far as I was concerned!

Interviewer: And did you spend hours playing with it?

S.R.:  Yes I did.  And that could be a solitary game: just rearranging the furniture, which I collected.  It didn’t come furnished; of course not.  So you collected the furniture, and kind people would dress tiny little dolls’ house dolls for me: I tried to dress them myself, that was much more disastrous!  You could make up little games with them, and characters.  It was lovely; and it was a great privilege if I allowed any of my sisters to come and have a game with my doll’s house with me.  You had to be in very good favour to be allowed to join in on that one!