Paintings conservator, speaking about her treatment of one of Knole's largest landscape paintings

Interviewed in 2016 by Veronica Walker-Smith 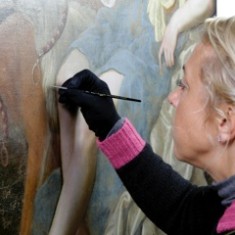 Conservator, Sophie Reddington, using a sable brush to work on a detail in the Wootton painting 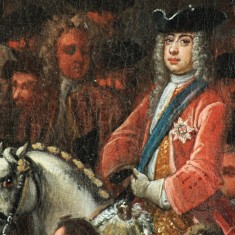 The 1st Duke of Dorset, after treatment 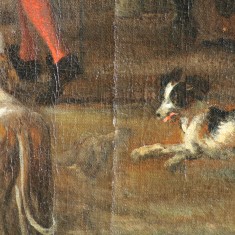 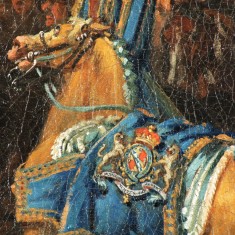 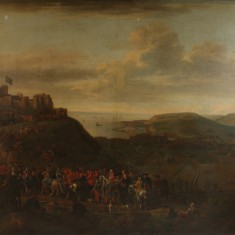 Before treatment, it was difficult to make out details of the port of Dover

After treatment, the sunny day in Dover is revealed

John Wootton’s painting “View with the Procession of Lionel Sackville, 1st Duke of Dorset returning to Dover Castle after taking the Oath of Office of Lord Warden of the Cinque Ports” measures 2.18 metres by 3.05 metres. It is one of the largest landscape paintings in the Knole Collection on display in the showrooms.

Painted in 1727, soon after the 1st Duke was appointed Lord Warden for the third time, this landscape takes its viewpoint from behind Dover Castle in Kent, with the town of Dover in the background. As part of the Inspired by Knole project, Sophie Reddington was commissioned to conserve this artwork, which used to hang above the fireplace in the Great Hall at Knole.

Before treatment, Sophie found the painting to have no mould and to be not as dusty as she had feared. During treatment, she removed earlier interventions when layers of varnish had been used and had deteriorated over time so that the landscape was difficult to read. She recalls just two of her most interesting revelations.

Revelations after removal of discoloured varnish

“It was quite exciting because slowly I was able to reveal all the original paint layers again, and I mean I must say the colours in the painting are amazing. I mean there’s really strong blues, really strong reds and they have not been affected in any way, while there were some areas which looked really quite worn. So when you look at the blues, like this must be the second horse of the Earl of Sackville – see the blues here – they are so magnificent. And then also the reds, they are all in amazing condition, whilst some of the landscape here – this group of riders in the right bottom corner – it’s really faded, very thin.”

“So different areas were sort of in different conditions, basically. And it was also fascinating to look at the blues more closely because my feeling is – we didn’t take any paint samples because the paint was really healthy, there was very little paint loss in this painting, which was great – and my feeling is that ultramarine pigment was used for the sky. And I researched the blue down here – and Prussian Blue came onto the market just before this painting was painted. So, my feeling is that – it spread really quickly around Europe – because everybody loved it, all the artists of that era took it on straightaway. So, my feeling is that John Wootton also got hold of this pigment and used it in the army, the soldiers’ jackets and also the horse. And then this looks quite faded – the blue and green in this area, and we were suspecting that maybe there is some smalt in it, smalt pigment.

Interviewer: So that’s the cheaper alternative to ultramarine?

“It’s very interesting. There’s one little detail which I love, which is only my own guess. But during the cleaning, I found a pentiment of a dog, here – which is still there when you see the painting – and the dog was playfully looking at this dog, as if the two dogs were sort of playing with each other. And then my idea is that – and I put that in my report – maybe when Sackville came into the studio to visit Wootton to see how he was getting on with the painting. And then he asked for the dog to be changed, because this dog is now looking up at him, and admiring him; giving him much more attention.”

Interviewer: I see, and drawing the eye also.

“Yes, and also straight up to him.”

Interviewer: What is a pentiment?

“Pentiment is when an artist has a change of mind, basically. When he draws or paints something, and then he changes his mind during the drawing or painting process, basically, that’s what we call a pentiment.”