Peeling back the layers of Knole 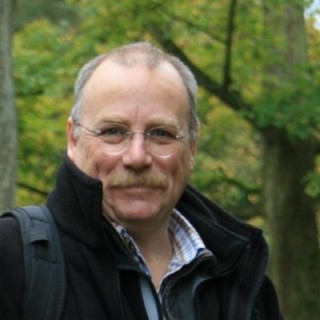 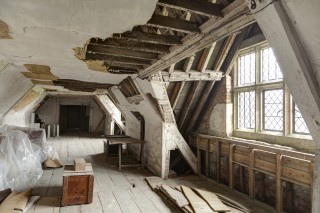 The South Barracks, one of Knole's attic spaces, with more stories to tell visitors from 2019 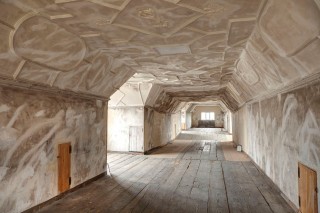 The Retainers Gallery: to be opened to visitors in 2019 as part of the Inspired by Knole Project

The chance to work on buildings like this…each one that comes up, you think, crikey, I’ll never have this chance again, and then another one comes up. So it’s a fascinating field, and you feel like you’re in a sense during your period of time which you’re responsible for it and then passing it on. So you feel like you’re part of a bigger picture in that sense. Yes, so we work a lot with the National Trust, English Heritage, private estates, but only on listed buildings.

Interviewer: That’s a lovely way of putting it, helping to protecting our architectural heritage.

Well it’s funny, sometimes I think architects can be seen as slightly, like, what’s the word egomaniacs… creating things to outlast their lifetime, and you know, be a sort of symbol of their time on this planet! So in a sense, it’s quite nice not to have that approach.  So actually, the building is here – far more important than I am – I’m just passing it on to the next team, as it were.

Interviewer: Conserving what there is, and helping to preserve it for longer, really. Give it new life sometimes as well.

Oh, definitely. Sometimes you have to give yourself a reality check: when you start to think of the buildings as a sort of, in a sense, having human characteristics and you start talking to them, looking at them as if they have these personalities to them. And you sometimes have to stop and think, no, no, they’re a bit of timber and stone

Interviewer: No, I think that’s lovely, I think buildings do actually have personalities! Can you tell us a little bit about how you feel about Knole then?

It’s a building that slowly reveals itself, in a sense, which I think a lot of buildings do. But I’ve noticed it more at Knole because when I first walked round, it was winter. It was freezing cold, it was colder inside than it was outside. Very dark, and so even trying to look at some of the furniture or the paintings, you really got a very dark image of what you were trying to see. And so then coming back progressively back round the building over a period of time, the blinds would be opened up, you know, and the lights were on. It started to reveal more and more of itself. So from a physical sense, every time you come round, and you look again, there’s always something  that starts to show itself –  something else you see which you hadn’t spotted the time before.  But in terms of informing that, that understanding, at the same time, I’ve been reading various books, Robert’s book, Inheritance, and the Disinheritance, and Vita Sackville-West’s history. And being able to read those books at the same time as you’re working on the building, moving through it, and you soon start to see the connections. And it’s when you’re standing in front of a door and you think, well actually, you know, so-and-so also put their hand on this door knob, and  opened this door and used this space and that gives it another added level or layer, both of understanding but also the mystery, in a sense, of what it is you’re doing.  And when we open up a building – so we’ve done a little bit of investigation in the building over the closed seasons – and it’s a bit like physically peeling an onion. You open up some panelling, you open up some floor-boarding and you see what’s behind. And the essential reading, the histories of the people who lived here over the past, you get the same sort of thing. You get a slightly different view and again, peeling back of the layers  and understanding and what it meant to be as a building and how the family have survived as a family here.