Forging links with the wider community 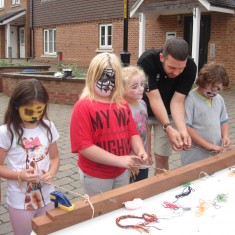 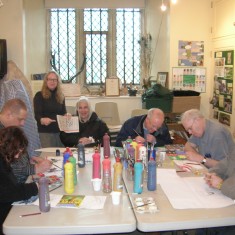 Some of the Mind art group, with Gill Whiting (standing), in Knole's education room in 2010

Jonathan Sargant worked at Knole from 2008, when he joined the team as Community Learning Officer.  His role was to make links with the local community and people who, in various ways, find it difficult to be involved at Knole, especially through learning in all its forms.

Integrating Knole better into the life of Sevenoaks

So I went out and talked to as many people in as many organisations as I could think of, and tried to find ways that we could work together for the benefit of people in Sevenoaks.

And I suppose the most long-term successful of those are with the Mind art group, which I will just explain: the lady at Mind, Gill Whiting, she’s the Community Liaison Officer and she’s also an art therapist, so she had just started up this art therapy group and I said “Why don’t you come and do it at Knole every fortnight?”  Because we were also trying to work out at the time how much we would charge to hire the education room, and the figure we came up with was £2 per person per hour, or half that for charities – and we got that from another property who did it on that basis.  So that’s what they did, and then when the Orangery became open – because previously it had just been for children’s lunches, schools that kind of thing – they were able to do art exhibitions there.

And because of that – this is what I really like – because that’s been so good for them it’s got them loads of money and given them an output for their art. They’ve set up two other art groups so the group which I was working with, they are the people with the most major mental health need,s and then there’s another one which also contributes which is women in vulnerable situations so mostly young women who have been suffering domestic abuse, and then there’s another group which they call the “Finishing” group, which is of people with sort of lower level needs or who are kind of coming out of needing support from Mind the idea of that is they are kind of putting the pieces together and making them ready in time for exhibitions, so it’s about working to timetables. So this whole big strand of work at Mind has come out of our being able to offer them the use of the education room and the Orangery, which is lovely. So that’s when I think it’s worked best.

Involving the community as part of the Knole Project

The other thing that is the one which is sort of close to my heart is an organisation called Fine Cell Work, who offer training in prisons in needlework to prisoners.  And their problem has been once the prisoners are out of prison they don’t run anything at all on the outside – no kind of moving on; and of course part of what we hope to do is sort of make good the shortage of conservators and restorers and people with those traditional craft skills and so there is a kind of possible link there… and the idea is they can come here to the conservation studio and learning centre to do sort of what comes after that, so really quite high-level stuff, mainly conservation.

Where we do have something new I think is with the conservation studio, particularly the learning centre. There is a lady on the learning panel called Annie Merton who was quoted to me as saying something like, “Knole gives the National Trust a very rare chance to do education properly,” which I agree with because so much of our learning in the Trust is – particularly at the moment, it’s all about informal learning. And at Knole we are slightly different already because of what Barbara does with this very high-quality primary schools thing. But I think also the idea of us offering qualifications which actually help people in a career path would be something, possibly not completely new for the Trust, I don’t actually know, but certainly very unusual.