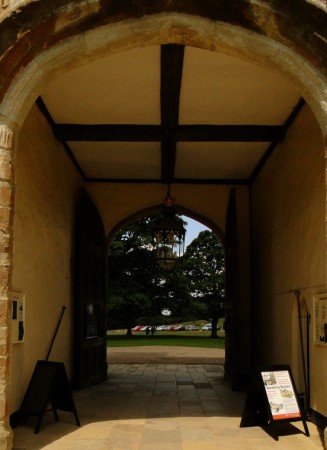 Ian Pattenden’s father, grandfather and grandmother worked at Knole, his grandparents as front hall porters, for the period between the wars.  Ian recalls some of his father’s reminiscences as well as when he visited Knole as a boy.

I think when he was about 10 or thereabouts he used to get up onto the roof, he used to go up into the servants’ quarters and then get out one of the maids’ bedroom windows onto the parapet and then up onto the roofs and run about onto the roofs which was highly dangerous.  Health and Safety would have a fit these days. Scared the life out of his mum when she used to look up and see him galloping about on the roof. But he used to run about on the roof and play games on his own ’cos he was fairly well on his own most of the time because his sister was a bit older and there was no other little boys around for a while.

One time when he was up on the roof he came back to the window he’d got out of and discovered the maid had closed the window, so he couldn’t get back in. All little boys in those days used to carry a pocket-knife, a penknife, so he took it out and levered the lead surround out of the diamond pane, took the diamond pane out, opened the window, climbed in and put the window pane back and put the lead back in.  ’Cos it’s all very soft and you can squish it back with your fingers. So he got back in that way.

Subsequent to that I think he – I don’t know whether the maid did it on purpose, but he ended up putting a big prickly hairbrush in her bed which scared the life out of her when she went to bed next.

Knole Estate staff in the 1930s

I.P: The main staff was obviously Mr. Booth the butler that I knew –

Was he quite a friendly man?

I.P: Yeah, he seemed friendly for a 10-year-old boy, I suppose, he seemed fairly friendly. I’ve heard about him, but I met him only the once.

I met the valet to Lord Sackville, a guy called Wynn, I don’t know what his Christian name was, everybody called him Wynn, or Winnie the Pooh. He was a very dapper, might be classed as an elegant man, perfect for a valet. And he was a very close friend of my grandmother and my father and my aunt. And in subsequent years when my aunt was living in Seal and my grandmother was living with her, he used to come and stay for a week or two and keep my grandmother company just for a holiday.

The other person I knew mostly from the servants or from the staff was – everybody used to call her Auntie Doris, or, if you were an adult, Big Doris. She was the cook, and a very statuesque lady: something approaching 6 feet tall and built in proportion. Very very charming lady, and a fantastic cook. The only person I’ve ever seem make a cake without weighing anything and only using a knife – to cut the butter up. She was extremely skilled as a cook, and obviously if she was going to be the cook to Lord and Lady Sackville she had to have a certain standard of expertise.

How to listen to stories told by a lady

He told me that when he was little – he was about I suppose 8 or thereabouts, 6 or 8 – walking up and down the Green Court with the then dowager Lady Sackville, who was knitting scarves for the troops in the trenches.  And he used to listen to her while she told him stories: fairy stories and adventure stories, and he was always criticised by her for saying ‘mm’ instead of ‘yes, my Lady’.  So she used to say ‘you must not say M when I tell you something, you must say “yes, my Lady”.’  He always remembered that.