You are here: Home>Latest contributions>Barbara Tate 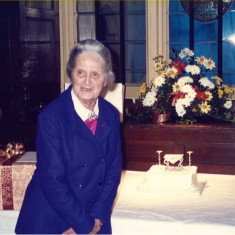 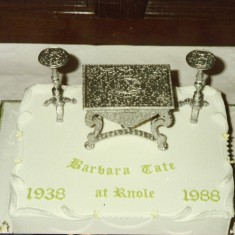 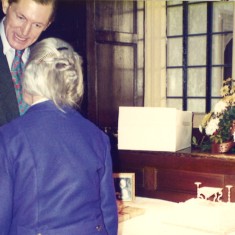 Barbara Tate went to work for the Sackville family in 1938 as a young girl, starting as second housemaid, one of a team of six. She looked after the ladies when the family entertained at weekends, but also Knole’s showrooms which were open two half days a week and one full day.

We had to be ready on the Saturday for them. We had one day cleaning the showrooms on the Wednesday and together with one girl above me, we were in charge of seeing to everything – the others underneath me – they had to crawl round the floors…everyone then had their own particular things to do. Fortunately I was in a position that I didn’t crawl round the floors. And, talk about conservation. Conservation was very, very well taken care of, as you can imagine with the girls having to crawl round the floors with dusters on their knees, thick dusters, and thick dusters to their hands. But the other one and myself saw more to the fabrics and the china and the dusting of things like that.

Interviewer: Quite a responsibility, wasn’t it?

Barbara received a silver medal from the National Trust, and she recalls meeting the Queen Mother who presented the medal to her at Knole.

She had lunch with Lord and Lady Sackville then we all met in the Great Hall – Lord Sackville’s staff the National Trust staff – and the Queen Mum came and sort of spoke, interviewed us all, just sort of had a walk round – but also I was presented with a silver medal. We had to go up and make our bow just before the dais – I’ll show you a picture – and we were presented with a silver medal from the National Trust.

Interviewer: Did the Queen Mother give it to you?

Interviewer: Did she say anything?

I don’t know, I can’t quite remember now what she said. I was so nervous because we had to go up on this dais and then of course after she gave it…you had to walk back and come down the steps and everybody was terrified I’d fall down!

There was a big garden party in the gardens in the front there – marquee, strawberry tea and all sorts and the Queen Mum was planting a tree. But the weather was so atrocious – nearly everybody had bought new clothes for the Queen Mum and her garden party – and even the Queen Mum had wellingtons and a raincoat on! As we went out and onto the front in the garden, you could hardly walk because it was so wet and muddy. There’d been a band but I don’t think the band played much, they just couldn’t stop out in the rain. You just got your tea as best you could in the marquee.

After being shown at a 'Treasures of England' exhibition in America, Barbara had to bring the silver furniture from the King's Room back to its former glory

It was bad. The table itself looked like lead. Mind, in a way I don’t blame them, not cleaning it. What I said was they should have sent me out to look after it, but they didn’t! Yes, the table, God, when I saw it.

Interviewer: What did you use then to get it back up again, the silver?

A lot of love! A lot of people – I sat outside in the Cartoon Gallery – and I used to be at it all day. I think it took me about three weeks.

Well, silver polish and I had to do all sorts really. Very carefully because it is too intricate and it took a terrible lot of doing. But I never, never thought it would ever come up again but it had done. And there were visitors coming then you see, but I sat at the top of the Cartoon Gallery and did it and in the daylight which was better than artificial light for doing it. And people used to come up and the guard used to say he couldn’t get people into the room they wanted to stop and see me doing the silver! A lot had come from America you see and they said, “We saw this in America.” I said, “Did you?” And they were absolutely thrilled.

Comments about this page