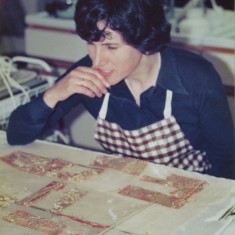 Jenny Wright during work on the King's Bed 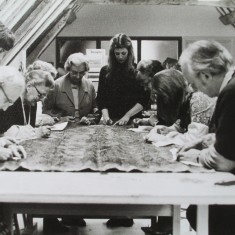 Two stalwart needlewomen who formed the core of volunteers stitching for 13 years to conserve the magnificent King’s Bed at Knole.

How the stiching team came together, and the repetitive work involved

J.W.: There were about…it’s an extraordinary thing, when you think about it, but there were over 100…because a lot of people responded. People from NADFAS, which is the National Association of Fine Arts Societies, and the National Trust obviously, and the Women’s Institutes, and interested volunteers. So Philippa had over 100. But we got down to hard core of … well, you’ll see the names in the booklet. And quite a lot of the people lasted the 13 years. And some came and went. Some people did one morning a fortnight, some people did an afternoon a fortnight, some people did all day a fortnight, or all day a week. But I ended up doing 3 days a week.  You see, you didn’t want somebody who was an embroiderer…you wanted somebody who liked stitching. You didn’t want them to create their own pattern. They had to follow the actual weave of the original woven fabric.  We didn’t want airy-fairy embroiderers.

That was made quite clear, was it?

J.W.: Absolutely, they just had to stitch over where the original weave was.

Right, and what stitch was that?

J.W.: Just a little catching stitch. You really…you sat at the frame, and had one hand above, and one hand below, and you just stitched…through and back, and through and back. It wasn’t glamorous!

So you laid the gold and silver threads…

J.W.: The gold and silver threads, on the whole, were there. But it was the weave, that kept them, made the pattern on them, that had disintegrated…and that was done with a silk thread, back in the…back when it as originally made, in the 1680s. So we had to replace the weave with a polyester thread, so that the gold and silver threads, sometimes they were still caught down by the initial weave and sometimes they were…the initial weave, the thread had disappeared. But the (gold and silver) threads were still there, on the whole, they just needed catching down and securing.

You’d have this frame, and then on the frame, would be sewn some polyester fabric. We started with one undyed, and then it was gradually dyed when we got the hang of it…a sort of tea colour, which was where there was no thread left at all. It had faded into the background quite well…ah the curtain tail would be washed. And then dried and then laid on this, and then stitched to this entirely. And the thread was gold, silver-gilt thread. and then silver thread, very, very fine thread, sort of like a wire, silver thread, making the background. And the silver thread was …down…you couldn’t replicate the weave. Because it was so fine. But you sewed it down in little bunches of two’s and three’s but never the same bunch with the next thread. But you sewed it down with a thread taken from a bit of terylene netting. Very fine, with number 11 curved needles.

Their strongest memories, friendships made, and a warm and well-lit work room

J.W.: I did myself, one chair back and one stool cover, but I won’t tell you which ones! That was because I came so often, I just had one particular one I worked on.

My strongest memories? I think it was the friendships that we had, and it was a wonderful atmosphere, I was going to say: once Annabel was there, and we all relaxed, and by this time, we really all knew what we were doing, which made a big difference. And it just was the most wonderful thing to do. And as I say, my husband said, well you won’t sew on a button or mend my socks for me, but you’ll go and sew up there during the week! But it was very compulsive, really wasn’t it?

J.W.: You got it into your head that you went along to Knole on a certain day every week, and you did. And Annabel also, she got the good idea to shut for two months in the summer. Didn’t have it all the time.

So you could all take a break. Does that mean you worked during the winter when it was cold?

I was going to say, was it heated

E.O.: And we had very good lighting. Daylight lighting up there as well.No, it was warm.