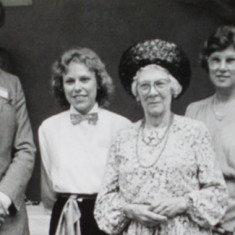 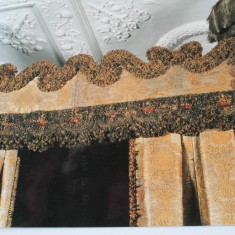 The Cloth of Gold King's Bed at Knole
Jenny Wright

The magnificent King's Bed at Knole conserved in 1987

Annabel Wylie, led the team of volunteer needlewomen conserving the King’s Bed at Knole from 1982 to 1987.

I think, given that the Cloth of Gold was being cleaned to a high level, we were trying to bring everything up to that, because otherwise other things would look pretty dreary in comparison.  So that kind of set the standard for what we were trying to achieve on everything.  But it wasn’t always possible, certainly, and the plumes were absolutely filthy with ingrained sooty soiling.  I think we surface cleaned them and solvent cleaned them but I can’t quite remember now…  And given that they’re pretty high up, they still had some effect given their shape and how they related to the rest of the bed… but we didn’t get them as clean as we might have done.  But then, you know, you’re saying restoration, it wasn’t a restoration.  It was a conservation.  We weren’t trying to make them to look as good as new.  We were trying to preserve it for future generations… in well, not quite in the state that we found it… but without… we weren’t trying to make it look as it might have done when it was first made. And that’s… it’s a very grey area… where conservation and restoration… but how I describe it is: restoration is restoring something to how it might have looked originally.  Conservation is preserving what you’ve got in front of you basically.

Cleaning the silver threads, one curtain at a time

A.W.: Given that the lampas, the outer fabric, the Cloth of Gold as we called it, was… the silver was very badly tarnished…and if it hadn’t been cleaned, it would have changed the appearance, oh it wouldn’t have changed the appearance of the bed, but it would have maintained the rather dull look that tarnished silver has, and that kind of over-powered the gold as well.  And the other ways of cleaning metal thread are with IMS – Industrial Methylated Spirits, IMS – you swab it with IMS – that takes off the dirt but it doesn’t always remove the tarnish… so although you’d know that your threads would be clean, you might not see very much difference in the actual effect of what you’d done… so it’s a tricky area.

There aren’t many ways of cleaning metal thread, that’s the problem, basically… so if you want shiny, shiny metal thread… then you have to do something fairly bold.

So the curtains came over one by one?