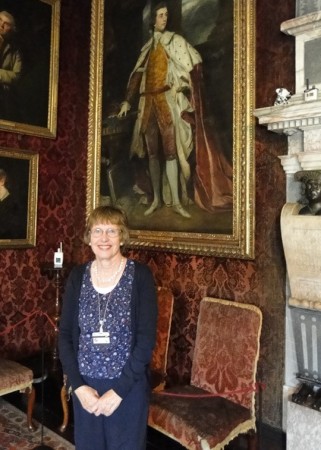 Clare in the Knole Reynolds Room in front of her favourite, the 3rd Duke of Dorset

Clare Fallows started volunteering at Knole in 1974, and has been a room steward or guide ever since.  She is now thought to be the National Trust’s second-longest-serving volunteer at a single property.  Here she remembers how she started, and gives some of her own perspectives on Knole.

I was only 28 and viewed with great suspicion because there were no younger stewards at that time, really. Yes, I think it does tend to be, because it’s retired people. But really, I got into it by accident.  My fiancé, as was then, and I, came down to Knole one day – he hadn’t been before.  And to my surprise I saw a lady sitting there whom I knew. And she was a lady I taught with at the time. A very formidable lady, Miss Eleanor Gouldson. An admirable lady, and she also became the longest-serving steward. And she said to me, “Would you like to do this?” So I said, “Oh, well, yes.” And then it went from there. Why I like stewarding, partly because I love history anyway, and I love this house. I think it’s really fascinating. I always tell people it’s not a flashy house; you won’t see lots of gold and bright colours. But it’s full of interest because there’s so much to see, really.  And the family is always interesting.  I’m always interested in families and family trees. And I’m still overawed when I go into Knole by its great age, when you think of its centuries. Some of the visitors say, “Oh, in those days…” And you think, well when do you mean? 1400s or 1800s? And still the same family as well.  I think it’s a big attraction as well. Visitors like that idea. Another reason I like stewarding is you meet all sorts of people, young and old, all nationalities. And I used to be a French teacher; and I can use my French quite a bit here, which is nice.

Changes in style of room stewarding

Things have changed quite a bit since I started. You had paid guides in about every two or three rooms, just a few stewards dotted around in between. We were supposed to always refer visitors’ questions to the guides; you were not supposed to really answer questions but say, go and ask that lady in the next room. But in practice, we didn’t do that, because if you knew the answer, you answered it there and then; it seemed rather foolish, but you had to be a little bit careful about these ladies’ sensibilities. And because of that, you weren’t really encouraged to learn so much about the house, although I did anyway, because I was very interested. But you know, we didn’t have the volunteer study hours or talks or anything like that. You know, you weren’t really encouraged to learn as much. It was much more formal. The style of stewarding was very much: Don’t Touch! And not as friendly towards the public. I much prefer it now, I think.

A bit in love with the 3rd Duke

I also like the Reynolds Room, partly because I’m a little bit in love with the 3rd Duke, being so handsome. He’s got a very interesting history, and all his ladies.  And then, because I taught French, you know, he was Ambassador to Versailles, which fascinates me that he knew Marie Antoinette and so on. So I’ve always been interested in him and I like the other pictures. And the Ballroom I love because of the family portraits as well as the decorations.