You are here: Home>Working at Knole>Volunteers>The History of Knole tapestry

The History of Knole tapestry

Interviews with the Textile Group Sevenoaks 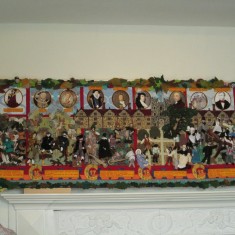 The History of Knole in three dimensions, created by the Textile Group Sevenoaks, showcases craft skills from knitting to felting to embroidery. 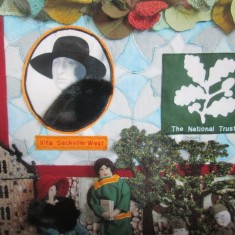 Dressed in mink and velvet, Vita on the History of Knole tapestry 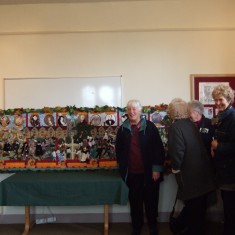 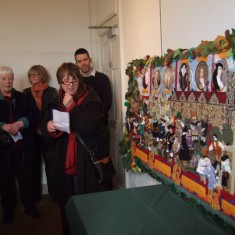 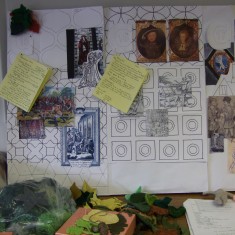 Hours of research and inspiration from Knole ceilings, Sevenoaks social history and the Sackville family 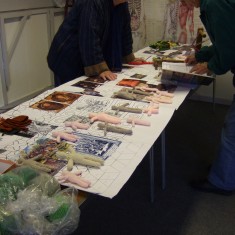 In 2011, Community Engagement Officer Jonathan Sargant initiated a two-year project to create a 21st century ‘History of Knole’ tapestry, with volunteers from the Textile Group Sevenoaks. The resulting piece of work by 55 volunteers is a stunning work of art and craft spanning six centuries of Knole’s history.

He’d found our textile group on the internet – and I said, “Well it sounds interesting to me. I’ll take it to the group.” We talked about it and Janet (Crowther) being one of our members agreed, after a bit of a push, to be our designer. And that’s really the beginning. She gave us an idea that we would have leaves all the way round the top of our big picture and then our picture would be, we’d have the sky and the grass and that would be done by  other people and with all our skills, we do spinning, weaving, knitting, crochet, patchwork which came in as the basic. People will say, “Well it doesn’t show much.” but it does really and then we found various people “Oh,” they said, “well I will do this and I will do that…” and then we found we had to make the bodies. Well, we knitted these bodies. There were tall ones, short ones, fat ones and different shape legs; but as Janet said, “It doesn’t matter because you are going to cover all those up by the clothes.” And that is what has happened.

Volunteer Maureen Baroni describes how she 'dressed' Vita Sackville-West in mink and velvet for the History of Knole tapestry.

M.B.: The background is cotton. It’s printed cotton. You can buy fabric that you can put through your printer and copy a photograph which is what was done by the lady who organised it.

M.B.: Yes, by Janet. So I just traced off the hat, cut it out, machined it on very carefully ‘cause I wanted to get the stitching near the edge. Then I put on the velvet for the shoulders and that was hand stitched on the foot of the machine would crush it otherwise and then I hand- sewed on the fur.  I had to borrow a bit of fur, well, “borrow it”.

What kind of fur was it?

M.B.: Mink. Yes, it was just an off-cut of mink which one of the ladies had. So that’s what she’s got round her shoulders.  I would have liked to use the whole piece but it looked a bit too much so I had to trim it and I’ve never used fur before so, for me that was a bit of a challenge.

And did you need special needles for the mink?

M.B.: No, I don’t do special needles- it’s just what I’ve got. Brute force and ignorance. (laughter).

Then we had all these naked bodies and they were to be dressed according to my instructions… for each century with imagery, images of the clothes, to set the scene for the seven different centuries.

What came back. Because they were bringing them along and I would stand up and say “Who has brought something back?”. Well “Is it good enough?” Always “Is it good enough?”.  I thought, come on – yes it is. If it isn’t we’ll just disguise it and then they would bring out this totally, brilliant, amazingly dressed people. Really good. The care and the thought behind some of them really amazing.

So that was the people bit. The house was then divided into ten sections which are all equal and the main tower in the middle. And so, I did come up here several times to work out what colour the bricks were or the stones were and it changed with the light. I took photographs obviously, pictures from the internet and this had to fit in the space it needed to, so you could see it and it had to be able to be constructed. And what I then had to do was work out the stitch for people to use and give them. I did small samples and so there were ten kits made. So that was the house; so that went away and came back in bits and pieces. Then we had the portraits across the top cause that was obviously important and because part of the thinking initially was you’ve got the people who live in the house in terms of the people who own it, a house like this, which is supported by an incredible number of servants.