Interviewed by Wendy Ferguson in 1987 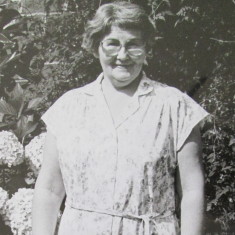 From the age of 3, the daughter of Knole chauffeur Manfred Fairweather lived and played in and around Knole 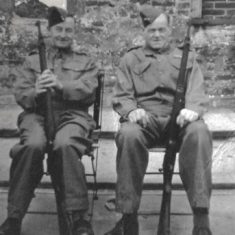 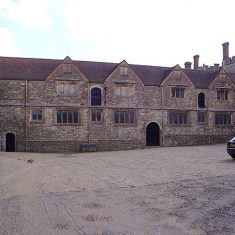 A view of the Hayloft and former stables at Knole 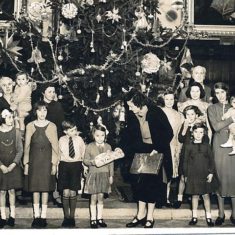 Pru Carter, née Fairweather, went to live at Knole at the age of 3. Her father was Manfred Fairweather who was hired to work for Knole Estate as chauffeur. She describes her earliest memories of living in Stable Court and being fascinated by the horses still stabled there, until motorised vehicles became the norm in the 1930s.

The Knole Christmas party and Pru's presents from Lady Sackville

“And the highlight of the year for the children was the Christmas party.  In fact we had, we were allowed out of school half an hour before school finished so that the children living around the other side of the park, around Godden Green, had time to go home and get back for the party.  The tea was always held in the servants’ hall, a long table with the usual sandwiches, cakes and jellies and after we’d had tea we were taken through into the Great Hall.

We entered by a little door at the side and there would be a large Christmas tree up that end and I think there must be a step, I seem to remember a step down, this tree was up on that.  And there was a huge fire with huge logs burning and little forms set out on either side for mothers to sit on and have a talk while the children played.

And once we were all there and settled, another side door would open and Lord and Lady Sackville would come in.  It would always seem to take me by surprise to suddenly see them standing there.  They asked for quiet and then the Butler called out our names: the Butler’s children first, then the Chauffeur’s, the Head Gardener’s and so down the scale.  As our names were called out the Housekeeper would hand the present to Her Ladyship and Her Ladyship would hand it to us.  I think we were all supposed to bob or curtsey but half the time I think we all forgot as we were so excited with our presents which were really very good presents.

Two outstanding I remember, one was a very large doll, the largest doll I had ever had and a tea set, not your ordinary sort of tin tea set, but it was a china tea set with almost full sized cups and a teapot, saucers and plates.  I loved that tea set!”

If you’d like to listen to Pru’s entire interview, you’re invited to search the British Library’s online catalogue, using ‘Knole’ as one of your search keywords. You can then read each interview’s timed content summary and reserve the recording for playback at the British Library in London.

I was three years old when we went to Knole.  My father was taken on as Chauffeur and my earliest memories of Knole were the stables, that were in existence then.   There was a stable underneath our flat containing, what I remember was three loose boxes and some stalls – whether they were the carriage horses because they were much smarter than the horses in the second stable which were the cart horses.

There was also a loose box at one end where a stallion was kept in.  But the time from then was only a matter of two or three years before all the horses had gone and a tractor had come in and a lorry.  So the remaining two horses were moved over to the boxes, which were across the park near Bow Petts where there was a small farm with a few sties with pigs in and the two horses.  I used to love to get over there because, mainly because of the horses.

Mr Drury who was the remaining horseman there, he lived in The Kennels near the Keeper’s cottage so he could be near the horses to see to them.  And I used to love to go round on the cart with him when he collected the rubbish to be taken over to the tip.  And cutting the bracken, watching him go round with the cutter cutting that.

The Knole wood shed, forge and the making of birch brooms

“I used to amuse myself by going round the woodshed, watching sawing up planks of wood and shaping the stakes for putting in the ground.  They used to shape the point on the end with the saw and stack them up there.  Or I would wander round to the blacksmith’s shop and watch him make the horseshoes and various iron implements that they used for tools.”

Interviewer: It was still very much a working community when you were there.

“Oh it was yes: the carpenter shop and the paint shop in full use which again I used to walk up and have a look round. And one of the gardeners had a stone shed there, which was full of faggots, and he used to make the birch brooms for sweeping the paths and the grass there. I used to see them bundle the bunch of twigs up and bind them around with another twig and then get a handle and bang it in.  You could bang it in until it was well forced into the sticks and made several of those and then they were used for sweeping the leaves and the paths.”

Garden vegetables and her first taste of ice cream

“And also we were allowed vegetables.  The gardener used to come down at the weekend, either Friday or Saturday with a handcart full of vegetables and what was left over after what was wanted in the house, was shared out amongst the Butler, my father and Mr Dinham.  Usually potatoes, cabbages, if there was a glut of runner beans, we had runner beans, onions, carrots, and there was always something left every week.”

Interviewer: I gather that you benefitted from the produce of the house when you were ill as well?

“Oh yes, when I was about six I went to have my tonsils out. In those days you went into hospital, had your tonsils out and I remember being two in a bed in a men’s ward.  As soon as my tonsils were out, I started whooping and was whipped out of the bed and in next to no time taken home.  And I couldn’t eat anything, naturally with whooping and a raw throat anyway, but the Cook used to send in bowls of ice cream, which my brother and the rest of the family thoroughly enjoyed but at that moment I couldn’t swallow at all!    The first memory of having some of it was a blackcurrant ice cream and I don’t think I have tasted ice cream quite like it!  It was lovely, real blackcurrants in it, it was gorgeous and that the first time I was able to eat the ice cream.”