Sevenoaks resident, with memories from the 1930s 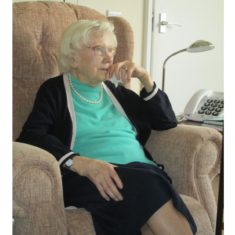 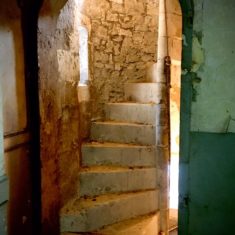 The stone spiral stairs up to Eddy's Music Room 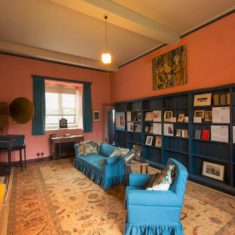 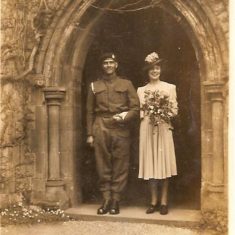 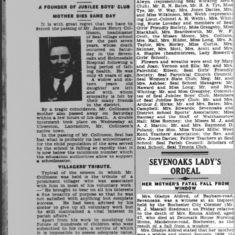 Eileen attended Seal Primary School as a child and recalls memories of meeting Eddy Sackville-West in his Gatehouse Tower rooms. Her favourite teacher was Miss Doris Pattenden who was a great influence on her, instilling a love of books and travel. Seal Primary School’s Headmaster Collinson is also remembered with fondness when our oral history team visited 97-year-old Eileen in February, 2019.

Eileen Bennett: They were putting on something in the [Seal] Village Hall and the School was there.  My cousin and I were going to represent ‘Autumn’.  You know we were going to dance, going around the Village Hall – I don’t know who cleared up – you know throwing all these [leaves] and so our teacher said – and remember we were not people with a lot of money to throw about, so she got some extra material from somewhere and they were just going to make us a bag somehow but she said, ‘I’ve got somebody who’s going to do it for me,’ and so she said, ‘Come to Knole.’

Well, in those days you could walk where you liked and we walked from Seal – to Knole going over the stony step.  But it was nothing to be ‘oh’ about because we did those things and then up through to the House and this gentleman, who turned out to be Mr Wynne took us up. And one thing I can remember very clearly is a winding, stone staircase.  And I’ve got a feeling we were above the main door.

E.B.: And there was a gentleman then in those rooms who called Mr Wynne ‘Wynne’; and that my cousin and I couldn’t understand. But obviously he was the gentleman’s gentleman and the gentleman played the piano for us to dance to.

I think he played something from Tchaikovsky because I later in life heard it and I thought: ‘That’s what we danced to!’ as we were throwing our leaves all round the room, and I can’t – well not now because I’m living a lot longer than many – but most of them can’t remember what music we had, you know.  But one or two did remember that we’d thrown the leaves all over the place. So I think it was something from Tchaikovsky.   But that’s most interesting that I did remember the right place. Golly, you’ve no idea, you’ve done me a lot of good this morning!   [laughter].

Yes, because we were all a bit surprised at that wedding I remember.  By then we were grown up but Miss Pattenden had mattered a lot and Mr Collinson who had been the Head, they really … the other teachers I now know had been older women and I think that they had most probably lost people in the war.  I remember Mother saying: ‘oh no, Eileen’ when I began to be 18, 19 and talked about people, Mother would say: ‘no, no, their men were killed in the 14-18 War’ and I realised that a lot of women teachers in fact wouldn’t have been teaching because then women didn’t go and do teaching like that, did they in schools?

E.B.: And it was because they’d lost their men.

Interviewer: What did Miss Pattenden teach you?  Was she a form teacher do you remember or was it a particular subject?

E.B.:   She taught everything then, you know you didn’t have one for history and one for something else and I remember her teaching English, that’s where I remember of her mostly, so perhaps that’s why she was reading to us.  We enjoyed her because she was young and we’d had older people as teachers and husband and wife and one lady. Actually the lady who read to us about Machu Picchu.

And the teacher who came as Headmaster, he said – it was a complete change for our village – he came from the North of England; and I remember what he said to us the first day very clearly: ‘I’ve come here and I’m going to show you that there is a world beyond these doors.’  And he did open up the world for us. Well, he did for me.  I don’t know what he did for other people. But obviously people in his family had had jobs that had meant they’d travelled, perhaps in the Navy or something like that.   And it was he who read Hiram Bingham’s book and we all had to read part of it. It was he who brought it in – and the other teachers took the classes – but he brought it in.

And I always dreamed of going to Machu Picchu and my husband wanted to go back to India but unfortunately, he didn’t, but he left me the money to have this journey so that one I did quite early.  I was only in my early 50s when I went to Machu Picchu. And I got up early in the morning because I’d read that dawn in Machu Picchu you should see. And so I’d got up every early and I was sitting … then you could go into Machu Picchu but I gather that now you can’t: it’s locked at night.  But I went in and sat in the square, what would have been the square.  We watched the dawn come up over Machu Picchu. It is something I would never have forgotten.  Never, never!

Oh, he was fantastic; some of us loved him, some of us hated him.  He was strict, but I … he was excellent.

Interviewer: You were right when earlier you mentioned that he came from the North of England.  Here it says: ‘Lancashire, Ulverston.’

E.B.: I knew he came from The North and afterwards I’ve thought how hard his parents must have worked to get him you know, coming from a working-class background, I knew how much parents gave up to give any of us a chance.

Interviewer: Yes.  And he died, sadly, very young in his forties.

E.B.: Yes, that’s right, I remember.  And do you know, all the older ones, we all went to the funeral.  No arrangement, we all just ended up there because he’d been very strict, a very strict man but I know he had a habit if he caught you out at night, you know you were out later than he thought you should be, he’d just go like that [looking at her watch]

Interviewer: And look at his watch?

E.B.: as he walked by and you knew you’d done something wrong. And we all went to that school. It was him, because four or five pupils got to the Grammar School and in those days, that was doing a lot for a village school.  And he obviously, I’ve thought since, his family I would have thought, would have been miners up in Lancashire and had given up a lot to educate him because he never let us forget how much our parents were doing for us.  He often used to say, ‘Your father hasn’t worked hard for you to sit there giggling.’ And he always called us ‘Miss’.  Oh, how wonderful.