The day a doodlebug was found at Knole.

Doodlebugs were sighted during the Second World War, in the skies above Knole 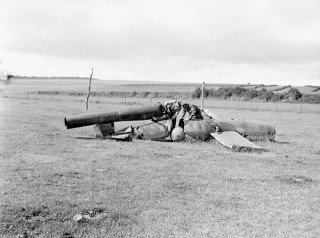 Arnold recalls finding a doodlebug in Knole Park, and recalls the very characteristic sound they made while in the air.

We are with Arnold Rogers and his wife. We are here to hear Arnold’s memories of when he was a schoolboy in 1944 at Sevenoaks School.

So as a school boy could you see these doodlebugs coming over?

Oh yes.  I mean the main thing was that you heard them because they were relatively small.  I actually don’t know the exact dimensions but I would have thought they were about 11-12 foot wingspan, possibly a bit longer.  And the one thing was of course once they had gone past, you were all right.

I was at Sevenoaks School at the time and in lunchtime used to go off and buy sandwiches as a day boy… and go and sit up a tree in the park or whatever so I have one or two particular memories.  The specific one was that we had bought our sandwiches in Sevenoaks and gone down Seal Hollow Road to go into the park in the gateway in the wall which is in those days was known as ‘the Hole in the Wall.’

Oh that’s good – it’s still like that!  And we went in there on this particular lunchtime and walked just straight on with the golf club on the left up on the hill; and to our surprise in that valley immediately below the golf club was a complete doodlebug,  just sitting there.  And there was a skid mark probably yards long with the doodlebug sitting there at the end on the grass, and we strolled over to it and had a good look round and suddenly for both of us, it dawned on us that we were standing there beside a live bomb!

And so our reaction then was we tiptoed away up and away behind trees and discussed what should we do?  Because obviously nobody had been there to fence it off or to put warnings on the gate or anything.  And we thought perhaps we should circle round and go up to the golf club and say, do you know that 50 yards down the hill there is a live doodlebug; or shall we go back to school and tell them?  We had a bit of a discussion and decided that whatever we did we would probably get into trouble.  So we went back to school and we said nothing to anybody!

Comments about this page