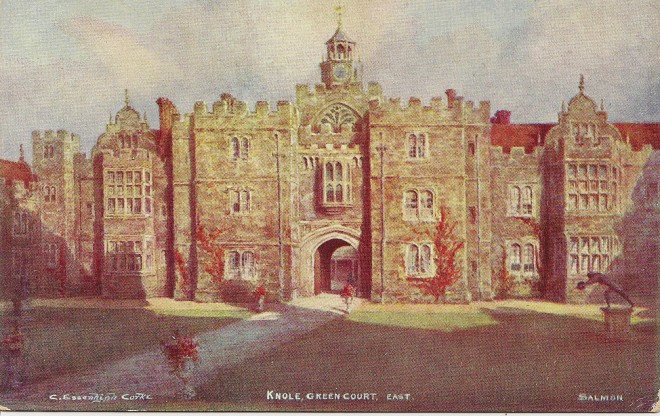 Evacuated to Kippington Grange in Sevenoaks as a grammar school boy from Woolwich in the 1940s, Roy Calthorpe recalls how, as a teacher in 1957, he brought a group of his own students from the east end in London, to Knole, on what turned out to be an extraordinary outing.

An extraordinary cycling trip to the Kent countryside

Having in the back of my mind that early memory of Knole and Sevenoaks, I thought that would be a good thing to do: to cycle to Sevenoaks from Walthamstow in Leyton, cross the river, down through the Darenth Valley, past Lullingstone Roman Villa and all of that, you know, and we could arrive at Knole.

So I paid their half crowns  – there were about 8 of us, I think. And of course,  cycling along that main road is amazing, because you can’t see the house for some considerable time. And you finally come over that, and they stopped and they said:  ‘Is that where we’re going?’ And I said, it is.  ‘And is there a family that live, what just one family?’ And I said yes.  What, just one family? And I said, yes. ‘Why do they want all that?’  Remembering that these boys come from Victorian terraces; long terraces with tiny little squares of back garden, outside loos, you know, all of that; so this was such an extraordinary vision – thinking that there was a family – a family that lived in all that! –you know, ‘why have they got it?’ All of those questions came tumbling out. And you know, they really hadn’t got, that time anyway, the vocabulary to express how they were feeling inside. They said:  ‘is all this their garden?’  With all these trees? And then we saw the deer…’why, why are they here? Do they feed them?  Why aren’t they afraid of us? Why don’t they run away?’ That, you know, was an extraordinary experience.

And then of course when we got inside the house, this space that they found themselves in, was so much larger than they had at home, that they huddled, they came together as rather a tight group and they moved almost like a little group. And they were in awe of the marvellous quality of the building, the things that they could see. And whilst there were many notices which said don’t touch and so on, it was clear that they didn’t want to. They were you know, hands in pockets, or folded, you know and they were just looking and gawping, I suppose really. Yes, they were asking questions but very, very quietly; and trying to make some sort of sense out of what they could see.

And then at the end of the visit, we came out and we had our sandwiches, and we sat under one of those big trees not far away from the house. And they started to talk about it…and they said ’Sir, where did all those things that they’ve got, come from?’ One of the other lads, ‘well, I saw a notice that said it’s come from India’. ‘How did it come from India?’ And one of them said, ‘I bet they nicked it!’ And so the discussion widened out into why it was that a, we had these very large and very beautiful houses spread out through England; you know, this wasn’t just the only one, there were many others. And there were many other situations where all these wonderful treasures from across the world had been collected by the families and so on and so forth, for all sorts of occasions. And they couldn’t understand that, they were, oh, very irritated by the fact that you know, somewhere else, where these things had been made, and they’d been robbed! And I said, well, not necessarily, I said: if you’re very good at a particular subject or sport or whatever, that prowess that you had, may be rewarded with a medal or a certificate. You’ve won that by showing you’re very good at something. It’s very possible that these people who live in these large houses have conducted work for the king or the queen in such a way that they have been honoured by the country to whom they were sent. And I said that, in that way they will have acquired these very precious things.  And as I often like to think that those group of children who came and saw Knole at that time, took away those memories and maybe, came back. It would be nice to know whether they did, and brought their own families back and explained in the same way as I explained, you know: why and how.