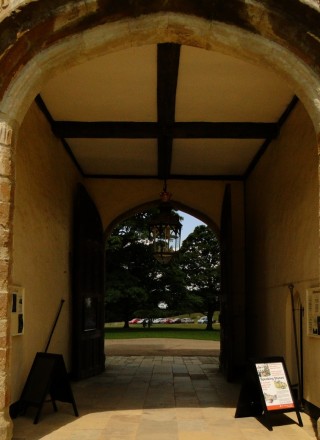 Molly Dinham’s husband, Bert, lived at Knole as a boy. His father, John William Dinham, always known as ‘Jack’, had been Lord Sackville’s groom and coachman before the First World War.  When cars came along after the Second World War, Jack, or Pa, as Molly called him, became second chauffeur to Lord Sackville, and drove the lorries and other vehicles on Knole estate. Molly recalls a time when she had a very close shave indeed.

M.D.: I nearly got killed by a doodlebug.

M.D.: Well it was 1944, when the doodlebugs were coming over.  I got a few days off, I was in  the Land Army and it was a lovely day like this and a friend and I decided we would walk to One Tree Hill, so we walked up to Godden Green and we walked – you know The Bucks Head, well, there’s a track at the back.  We walked along there and there’s a gate into the park and we leaned on the gate and were deciding whether to go into the park or go on up to One Tree Hill.  And something inside me said don’t go into the park.  I can’t explain it.  So we didn’t go into the park, and as we were walking through the trees back to the main road we heard the doodlebug come and it stopped and it crashed and we found ourselves holding hands through [recording unclear] path.  Very eerie.  After that One Tree Hill didn’t seem a very good idea.  So we went home.  The next day we found out where it had crashed and had we gone into the park, I wouldn’t be here now.  Because we would have been right where it came down, at Bow Petts.