Stung by wasps while walking the dog 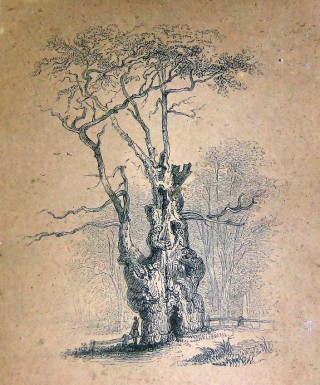 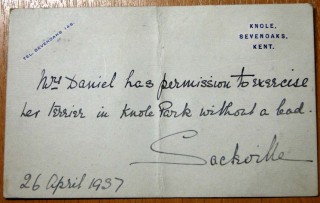 A permission slip from Lord Sackville allowing Mrs. Daniel to walk her dog in the park without a lead
Photo from John Scott

John Scott moved to Sevenoaks to live with his grandmother in the summer of 1945. He was three months old when he arrived, and over the next 18 years spent a lot of his time in and around the Knole Park. As a young boy he would come to the park regularly to walk his dog and explore the area. He also played golf in the summer and tobogganed during snowy winters.

What is your earliest memory of Knole?

JS: One of my earliest memories was – well, I should explain that for my second birthday I was given a large Labrador, we used to exercise him in Knole park. And one of my earliest memories was with my mother and the dog, in the park. I think I know roughly where it was. I must have been about 3 or 4 years old, and I’d obviously just learned to jump and I was jumping on and off a tree stump.

Unfortunately the tree stump had a wasps nest in it, and the wasps weren’t very happy about this. I remember being stung from top to toe, and the dog, and my mother. And so she ran all the way back to the hole in the wall and down Seal Hollow Road to Brendan Cottage where we lived. My grandmother rushed off into the garden, dug up an onion; meanwhile my mother was taking all my clothes off and releasing all the wasps that were inside and I was screaming blue murder.

My grandmother came in, cut the onion in half and they rubbed it all over my body and within ten minutes all the pain had gone. That’s my first memory of Knole and Knole Park!