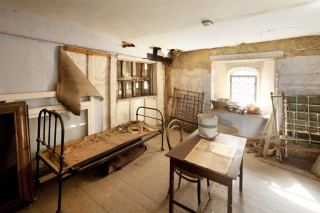 Once occupied by Knole Estate staff, a room in the Pigeon Lofts
Photo by John Miller

Gwen Froggatt’s mother was a close friend of Knole’s housekeeper in 1945, one Muriel Pinner.  Here Gwen remembers her, as well as her hats…

G.F: My mother had a friend who was a housekeeper at Knole. Her name was Muriel Pinner.  She used to come to tea and she wore these great big hats.  And as children we used to try them on and one day she came and caught us in the dining room.  She always had a dark coat on.  And she invited us up to tea one afternoon in her apartment.  I can remember going there but I can’t remember the door we went into.  And she had a very big room and there was a huge ring with all these keys on it.  We had tea there but I think as children we were too noisy and we never got invited back again!

The hats amuse me….

GF: I know!  She used to come down quite frequently, I think on her day off she had nothing to do; we lived in Bradbourne Park Road and she used to walk down to see us.  And she always came in a sort of navy blue coat but these great big hats which really did amuse us as children.  We had to try them on.

Did you feel that there were other people living in the apartment with her?

GF: She was living by herself, she had her own apartment.  Awful lot of stairs, I remember.

So she was upstairs somewhere?

GF: Upstairs.  It wasn’t all that big.  As far as I can remember it was just ordinary, chairs and a table.

The keys are interesting.

GF: The ring of keys, they were interesting… I suppose she used to wear them around her waist.  That’s all the keys to all the rooms I suppose.  They were great big, old fashioned. Not keys like I’ve got keys.  They were quite fascinating.

Because she was a housekeeper…

GF: Yes, I don’t know whether she was the head housekeeper or not, but she was a housekeeper there and I think she had quite a lot of authority.

Yes, she had the keys, she must have done.

GF: She gave you that impression.  She went round giving orders all the time.  Rather bossy kind of person, you know.