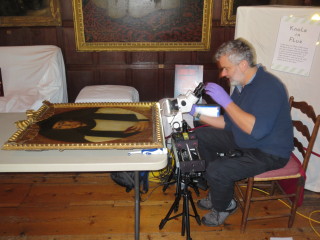 Dendrochronology or tree-ring dating is part of the behind-the-scenes study of Knole’s interiors. In 2015, Ian Tyers studied the oak panelling in the Spangled Bedroom, revealed because the tapestries previously covering them, had been taken down for conservation. On a busy summer’s day, with visitors walking about in the showrooms, Ian explains why the oak panels from the Baltic delighted him.

For somebody who likes his trees they’re the most beautiful, beautiful oak trees that you can imagine. They’re completely different from the oaks in the park. If you walk around the park, all of the trees are relatively short and they’re got quite twisty stems and they’ve got lots and lots of low branches in them. If you look at those, they have no branches at all, the grain absolutely dead straight, there’s no twist and no taper in them. So they’re coming from trees which are very, very regular, very, very round and very, very tall. And they’ve been cut into lengths, split into boards and brought over into this country. And it’s part of a trade that we know starts up in the later 13th century