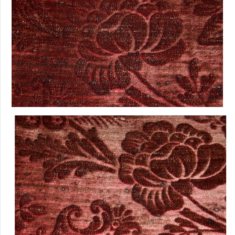 Commissioned to conserve the rare caffoy textile covering the East wall of the Cartoon Gallery, textile conservator Zenzie Tinker describes how in detaching some of the east wall patches, she discovered beneath them, signs of an early 17th century painted decoration scheme which generated a lot of curatorial excitement.

We’ve had a team of 4 to work at Knole and there was this huge excitement about the painted decoration. Emma, the Curator, was desperate to see the painted decoration in its full extent because it became apparent that it might extend all the way down the wall of the Cartoon Gallery. So our East wall project carried on but it then became the north wall as well. I was asked to come up with a suggestion with how to reveal that decoration in a way that was safe for the caffoy – that didn’t involve taking the whole wall down it would have been very expensive and very  time-consuming and quite risky to take the whole of the (caffoy covering the north) wall down, but we did have a wonderful opportunity to take a look at it – because the Raphael Cartoons were coming down for conservation, so it was a “now or never” time to have a look at that painted decoration.

So the cautious conservator in me was saying: this is a crazy idea, we can’t release the top edge of it, that’s too risky for the textile.  But the adventurous part of me was thinking: no we’ve got to do this, and everyone was so excited about it, so I came up with a plan. And of course we’re trying to do this with as little interference with the original, as possible, so we’re trying not to unpick seams so it was quite a difficult thing to do.

We were aware that the tape at the top holding the caffoy to the wall was very weak. The House knew that. They’d had an instant a few years before where the caffoy in the Reynolds Room detached in a few places, so we were all aware that it was pretty weak. So we knew that if we were taking it down, we would have to put a new fixing mechanism, which is what we’ve done.

I think it’s the size and the scale of the textile. We’ve got two different problems we’re dealing with: one in situ problem with the north wall that’s been left in situ to work on, and then the east wall which we’ve taken down. So you’ve got slightly different challenges with both of them. The risk with the east wall is that we wouldn’t be able to get it up again as it was. The risk with the north wall – which we’ve proved that wrong now – was that with the north wall was that as we unattached the top edge we would lose control and it would slide down the wall. So to prevent that from happening we put a line of padded battens about a meter down horizontally all the way along and nailed those through the caffoy to hold it in place. And that stabilised the weight and then allowed us to release the top edge and flop it down and expose the painted areas. What’s extraordinary is that this incredibly heavy piece of fabric is only held by its top edge and side edges and that fixing is compromised by age now, so it’s quite fragile.