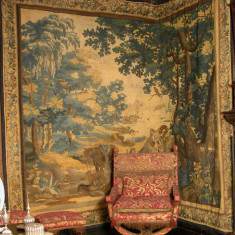 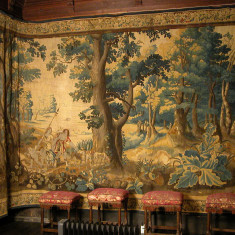 Reydams tapestry in Knole's Spangle Bedroom, one of four returned to display in 2019 after conservation

Martha Infray joined the Inspired by Knole Project in 2015 and almost immediately plunged into the vital mini-project of dismantling one of Knole’s three state beds, readying it to be sent away for conservation. The Spangled Bed is more than 300 years old and gives its name to the bedroom where four beautiful and fragile tapestries also had to be readied for surface cleaning and packing ahead of specialist off-site conservation.

Dismantling the Spangled Bed at Knole

"Dismantling the Spangled Bed at Knole" by Martha Infray. Released: 2016.

The first time I saw the bed I just thought, this is quite a big bed! And thank God we’ve got four days to do that, because of course we had to do the work in front of the public as well. So it involved making sure everybody had what they needed on the day, all the packing materials and things like that. And also making sure we had volunteers in the room as well to explain to visitors what was happening. There was also a very small risk that the top of the bed was actually holding the ceiling, so we had the building surveyor on site to make sure that in case anything should happen we had the right people on site. But as we all know, it all went very, very well and within four days the whole bed was taken down and packed, which is brilliant.

There were some moments of stress,  I think Kysnia the textile specialist was a bit nervous to start with, because of course when you take an object as big as the bed there’s always a risk. And of course the bed hadn’t been taken down in 300 years so they weren’t quite sure what they would find and how it would go. But with a bit of reassurance, she was absolutely fine.  It was a real joy to work with everybody and seeing how the public had also reacted to seeing the bed being taken down. And of course everything was filmed as well and we have now a beautiful film of the Spangled Bed being taken down. So we have kept all of the dust samples of course, all of the spangles will be re-attached to the fabric of the bed once they’ve undergone conservation treatment.  Every little detail counts in conservation and you’ve got to be patient.

The first stage was to take them down and make them ready for wet cleaning, so removing the lining and just doing a surface clean using a museum vac just the very basics, then they were rolled and taken to Belgium for wet cleaning by which time, Kysnia (Marko) and I had gone through the whole tender process and we had awarded the conservation treatment to two conservators, May Berkouwer who work in Suffolk and two have gone to Zenzie Tinker in Brighton.  Once we knew which tapestry was going where, it was just a question of filling up the right transport forms and then the tapestries left in January of 2016 and they will be conserved in the next few years, ready to be re-instated in the Spangled Bedroom in 2018. So, very exciting.