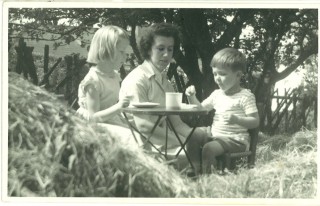 Margaret Kingsnorth with Robert Sackville-West and a friend in Tankerton 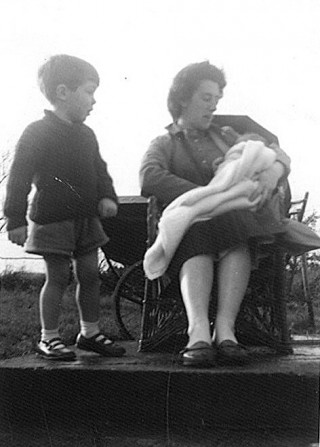 Margaret Kingsnorth was nanny to the current Lord Sackville and his family in the late 1950s and early 1960s. She has many stories to tell about what they all did together, including one particular trip to Sissinghurst when they unexpectedly had tea with Vita Sackville-West and Harold Nicolson.

My name is Margaret Kingsnorth, and I was nanny to the Sackville-West children when Lord Sackville was seventeen months old when I first met him.

I took them home with me for the weekend to my council house in Faversham, which was a bit of a shock to them! But they really enjoyed it; and I took them to see my sister who had a poodle parlour in Faversham and they remember that very well.

And I took them to Dover and I walked them from the station to the castle. It’s miles! Why did I do that?

And you took them to Sissinghurst didn’t you?

Oh yes, we went on a picnic to Sissinghurst with Mr & Mrs Sackville-West when we had just the two children. And we met Vita Sackville-West in the garden, who insisted we come to tea. And so we were in what now is the library, and Mrs Sackville-West was rather embarrassed because we had got our sandwiches wrapped in foil, but I tried to persuade her that they matched the silver teapot that the butler bought in. I don’t remember too much about it because I was down the other end of the table, below the salt I think! And I think Vita was quite elderly then so she wasn’t into children and sandwiches and things.

And you met Harold that day?

Yes, we got there and Sir Harold Nicolson was standing there in his tennis shoes and his white flannels looking rather damp, and he said to my two little ones “I’ve just walked across the paddling pool with my clothes on. Shall I do it again?” They didn’t know whether to say yes or no. So he just got on and did it. He walked into the paddling pool and out the other side, walked off across the garden, dripping wet, with all the visitors thinking ‘who is this strange old man?’ not knowing he was Harold Nicolson. The children couldn’t believe that anyone, a grown up, could do that.