You are here: Home>Working at Knole>Cyril Haysom meets the Queen Mother in 1980 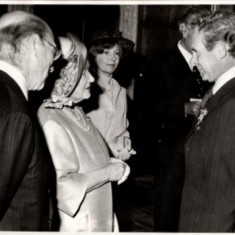 The Queen Mother presented the British Empire Medal to Cyril at Knole in 1980. 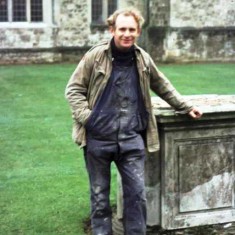 Cyril Haysom, an employee of Gravesend Stonemasons, arrived at Knole in 1963 for a one-off job working on some windows.  But it wasn’t until 1984, 21 years later, that he finally left.  In those years, he came to know almost every inch of Knole’s stonework, and his contributions were recognised when he received the British Empire Medal from the Queen Mother in 1980. His citation can be read in full in the attached document at the bottom of this page.

How Cyril started at Knole 'just' to work on 21 windows

CH: Well, I worked for a firm called Gravesend Stonemasons and initially we had the job to do, I think it was 21 windows, or something or other. And it just went on from there. It just carried on, and finished up. It was 21 years in all.   We were employed to do the stone work.  But we took windows out, we took the glass out for Bill Hughes, he repaired the glass, we put the windows in, and when the glass came back he put the windows back in the openings.  If a room had to be done, we put up plastic screens, because we were taking the windows out, but we took all the pictures down. We even took that big one of Dover Castle down in the Great Hall and put it back.

[Speaking about the Retainers’ Gallery, together with former Knole Estate builder, Alan Grubb, who worked at Knole from 1963-1990.]

CH: Oh yes, there was a big truss that went across…

I’ve got a photograph of that actually, still.

CH: And we also removed the fireplace that was up there.

And took it down to the South Wing

CH: We reversed the fireplaces.  And we put all the cantilever irons in, to hold up the ceiling.

Alan Grubb: At the end of the beams.

CH: At the end of the beams, because some of them were only resting on about ¾ of an inch, just leaf mould really, pushed in.  And the clock towers above and all those timbers that went across were 13 inches square, the full length of the hall, apart from two, the middle ones, and they were softwood.

CH: Yes, and in the history of the Sackvilles, Sackville paid Thomas Kerwin for two deals and I reckon that’s the two deals.  On the outside they were okay, but they were decayed inside and we got a piece of rod and shoved it up through the middle – it went in 8 foot. We put extra long cantilever irons on there and they had a firm called Renforce came down and did carbon-fibre rods and resin –

CH: Yep, to reinforce the ends.  When the clock tower was up there it became unsafe and that’s when it became disused as a gallery. And when Hauduroy painted the staircase going up, he only went up as far as you could see, and you’ve got the original above there. After that, it was still getting dodgy, and who he was, we don’t know, but he was a genius I think, because he put the first iron cantilever on.  We’ve marked it up there and if you go and stick your head underneath one of those eaves, you can see the original work and I’ve marked it out in chalk.  And it’s 17 – I’ve got a photograph of it at home – 1790 whatever, and the initials, and even the little wedges that he used to tighten up, they all had the iron maker’s mark, and dated.