Leslie's mother was housemaid at Knole in 1880 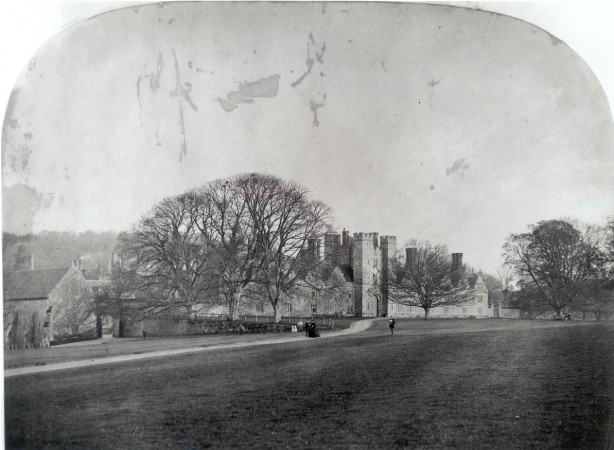 Leslie’s mother, Rose Bondwick, was a maid – a ‘skivvy’, in her own words – coming to Knole in about 1880 at a very young age and working in the kitchens.  Later in life she passed on many of her memories to her children.

L.F: The name of my mother was Rose Bondwick, who lived in a tied cottage in the village of Sevenoaks, and where she was then inducted into the services of Knole House of about 6 to 7 years old as a skivvy, or that’s the name that she said she was.

Now part of her job was cooking, and obviously serving at table from time to time. And she also did the serviettes and the table-ware, which had to be cleaned very thoroughly, and in the winter-time it was very difficult to actually get them clean. So she used a butt in one of the halls or alleyways, which was rainwater from the roof came into the butt, which was a lead butt heavily embossed. And she told me about this, and a later consequence is I visited the place and I then recognised and saw the butt that she used to scrub and clean the cloths in.

She told me that her hands got chapped and became a little bit raw in the winter-time, and although she put ointment on them, they were still in a nasty state. But, for the grace of the family, if she was handing out food to them she had to wear white gloves to disguise the fact that her hands were in a terrible state through the scrubbing and the cleaning, most probably of the starch that they used in those times.

L.F: Now one such story was one of her jobs was to go down to the gate and pick up the paper. And she had a favourite cow. She used to get on the cow’s back and they used to ride down together to the gate, pick up the paper and ride back again. And it was her thing of the day that she successfully rode the cow, and the cow let her sit there and that was fine. And she brought the paper back and she had to put a light to the actual iron – it was a big heavy iron that had a burner in it or some such – she had to light it, get it hot and then iron the paper before his Lordship came down to read his paper, which was rather twee I thought.

And we don’t know where this cow was kept?

L.F: No. All I know is she used to go out the back or the side of the house to go and see it, because there were occasions where she used to go and milk it. And she got quite adept at doing it, she liked it, and it was quite nice to her, so she called it Daisy. And Daisy the cow and her used to roam around together, on her oddments sort of thing, but she definitely went and rode it down to the gate to pick up the paper.

[Note: the cow may have lived at the old farm which was situated where the golf course is today.]

A policeman and a pie

A story she told us was that in her cooking days she used to put a pie on the outside sill of the kitchen to cool in preparation for the meal in the evening. And the local policeman used to come for a cup of tea on his bicycle. And he was a hardy, nice chap and all the rest of it, but on one particular day he came and he pinched her bum. She was a little offended but she wasn’t totally offended. But what she really was offended with was he had stolen a piece of her pie, and she was going to get into trouble over this because a whole pie is presented on the table, you don’t put a whole pie with a slice out of it otherwise they’d think the staff was nibbling at it. So she was going to be in trouble.

Apart from the fact that she was going to be in trouble, he’d pinched her bottom. And she got enraged. So she took the rolling-pin, and set about the job of hitting the policeman over the head several times with it and laid him out in the drive. Of which she got arrested. She was arrested and charged, found guilty and they sent her to prison for seven days.