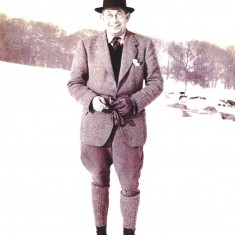 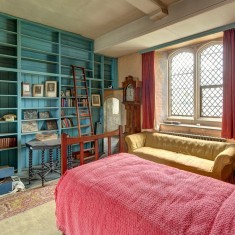 Ian Mason’s father Frank became Estate Manager at Knole in around 1943, through the end of WWII and the transition of ownership to the National Trust. He continued working for the Sackville-West family’s Knole Estate until he was 83 years old.  Ian remembers visiting his father’s place of work, and shares some other reminiscences too.

I.M.: As I said, this began his association with Knole which lasted some 40 years.  He retired at the age of 83.  Actually, he ceased to be the estate manager in 1967 when Mr Hugh Sackville took over.

But the old man was kept on because of his knowledge.  I think they were very pleased to have him.

As you say, he did practically everything here. So what exactly were his duties, do you know?

I.M.: Well, he carried on doing what he did before presumably, paid all the staff and that sort of thing.  He used to be in that little room, well not a little room but, down there in the corner of the courtyard.  If you came into the courtyard, he was in the top right hand corner, there’s what was the office with a huge roaring fire in the beginning.

He had a large room over the main entrance there which you got to up a tiny, winding, stone staircase. And each of the little towers in each corner, well one was the stairs and I think one was the loo, and the other was some sort of bathroom and the other I think is a wardrobe. So he lived there during the week. I think they still call it Mason’s Room—

I believe they do, yes. That’s a great honour.

I.M.: He was there for 40 years as I say.  He never knew that of course, he would be very honoured to know that.

As I said, as a small boy, on a number of occasions I came down to Knole with him, and I remember that we always ended up having tea with Mr and Mrs Doggett, Mr Doggett being the estate foreman at the time. He was a charming old boy and his wife was very pleasant, too. We always used to go in there and have tea at the end of the day.

I said here, I don’t know whether it’s appropriate now, when he died I had this idea of scattering his ashes somewhere on the estate. And I rang up, it was Mr Lionel Sackville who was the Lord Sackville at the time, and he willingly agreed to this. Then I was thinking about it afterwards and I just could not imagine scattering the old man’s ashes. So I rang up again and said, look, would it be possible to bury the casket? And he said, certainly. And in fact that’s what happened. He invited me down to lunch, we did this just before lunch, there was a nice neat hole dug in Green Court there and he was put in there and covered up and that was it. I agreed that there would be no plate or memorial or anything like that. So there he is, still there. He would have been absolutely over the moon if he’d known that. Of course he didn’t know.

When my father died I had a very nice telephone call, or letter, I can’t remember which, from the lawyers of the estate telling me that they were very sorry but there was nothing in what they referred to as ‘the rules’, I don’t quite know what that means but I suppose it was the family trust or whatever, which allowed them to pay a pension to my mother, his widow. But they said she’s very welcome to stay in that house for as a long as she likes and if there’s anything we can do to make her life better there, we’d be pleased to do it. And I suggested to them, and I’m sure it was the right thing, that there was no central heating in the place and I said I’m sure when it comes to your selling it that would be a good plus. And they did, they paid for the gas, water, came and put the central heating in. I reckon when they sold it they made a good profit.