You are here: Home>Working at Knole>Staff>Bill Manning worked on the Ballroom sconces 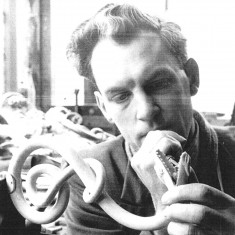 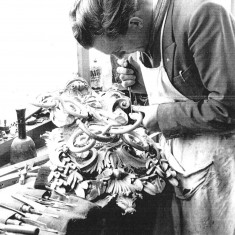 Bill Manning carried out an enormous amount of decorative carpentry work at Knole in the 1960s and 1970s, especially in the state rooms.  In this walkabout interview he tells us about some of the work he did, and muses on the age-old argument of whether to repair, restore or conserve.

I’ll show you some more chairs in a minute where the decoration’s come off them to such a point that if they had not been restored, you wouldn’t have anything.  And this argument has been going on for centuries, do you conserve, do you repair or do you restore?  And it’s very complex and I don’t know what the answer is. And I suppose you dare not touch it.  I always think, particularly with this very old stuff, that when it was brought here it was a gift of the then treasure, and it was old when it got here so it wasn’t in good state of repair in the first place.  I don’t think it’s unreasonable that you would expect furniture of this age to have had something done to it.

So again they’d have been in your workshop would they?

Yes, certainly. But the panel paintings go back to around about 1600 but they were reframed in the 18th century, so they were handled then and the reframing is now 2 or 300 years old itself.

BM: After the war when they started to bring this stuff out, it all went into the cellars and wherever, and a lot of them got damaged at that time and there was a lot of dry rot.

Which cellars would they have been in, have you any idea?

BM: I don’t actually know. I know that some of it was underneath the garage as it is now. The point is that the cleaners there, there were between 4 cleaners here, Mrs Greaves was one and Barbara was another, and whenever you used to find a little piece they used to tuck it away somewhere or other. And there was bits turning up all over the place.

Oh my goodness, yes. So they all had to be fixed together? Did you have to make any new pieces?

BM: Ooh there’s a lot. I reckon– I strongly suspect a half of those ribbons are new. But again, is it right to put the ribbons back or…?

A portrait from the Brown Gallery, with a damaged name ribbon
Photo © NT Knole

Under the Great Stairs...

BM: That pillar – shouldn’t be there! But years ago when they started allowing… It always used to be guided tours and when they started letting the crowds to come through, it was decided that it wasn’t entirely safe so they put that beam in there to hold it up which is kind of a pity because it was what they call a cantilever

But if you look round the back, the chap that did the decorating he’s left a little poem. Did you know that?

The modern supporting pillar under the Great Stairs

The candlestands in Lady Betty's sitting-room

These are the candlestands in the sitting room – what did you have to do to them?

BM: Well they were all falling to bits; they wouldn’t stand up on their own.

So you had to make new parts of the feet to them or adjust them?

BM: It was a question of making them stand up really, doing sufficiently to them to… Again, this is probably something which the experts don’t agree to do, but if you didn’t do it—

They wouldn’t be able to be in the room at all.