Knole kitchen staff in 1900, Kay's mother is second from left 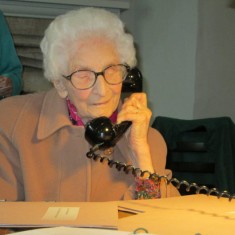 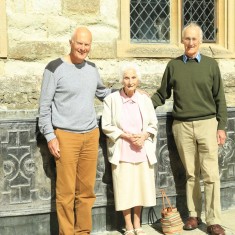 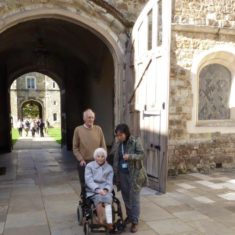 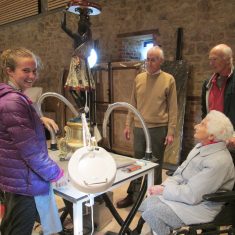 Kay and sons with conservator CLaudia Davies in the Knole Conservation Studio, 2017 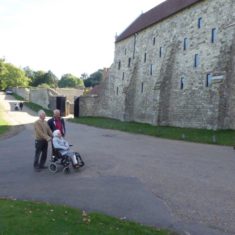 Kay and her sons, Ian and Paul admiring the conserved exterior of the medieval Barn at Knole in 2018 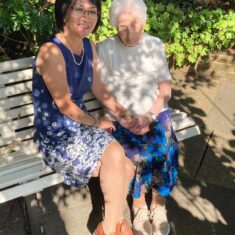 A great friend of Knole, Kay at 106, at home in September 2021, with Veronica Walker-Smith

K.S.: She said to me about the kitchens (at Knole). There were about nine of them, the cooks, and they all had separate stoves to cook on. I think she must have been able to cook meat very well. I suppose they wanted her to cook vegetables as well, so she went to the London College to learn. I know she learnt to cook soups and sauces. And also stews. And her vegetables were always very nice. King Edward the 7th complimented on her on her beef, which he used to like rare. And so my father always had to have rare beef because he said “Do you think we could have it a bit better cooked?”. She said, “But it was good enough for King Edward, you know?” So I’m afraid he always had to have rare beef!

So when she talked to you about Knole’s French chef, what did she tell you about him? What sort of details did she give?

K.S.: She said, “Oh, he was a terror,” she said. “Dancing and bouncing all around the kitchen and you know when he got into a temper, he would throw anything, knives and all!” she said.

Oh yes, he was a man who could be very sarcastic when he liked. My mother said when they had these big banquets and things, and they were always entertaining, my mother was up from 4 in the morning, and she’d be lucky if she went to bed until about 10 in the evening, because they then had to start again, to prepare for the next day, you see. One morning, she overslept, so he (the chef) sent a message up by one of the staff: “Did Madame intend to stay in bed all day?” And that was at 4:15. So you can see the staff really were pretty rigid. I would say that Lord and Lady Sackville didn’t know a quarter of what really went on down there.

Kay recalls the downstairs staff hierarchy and stories her mother told her about the menus at Knole in 1901.

K.S.: The rules were made by the staff. I don’t know if my mother ever had a day off. She never mentioned it. She certainly never had a week’s holiday or anything like that.

So when we talk about hierarchy, she would report directly to the chef, the French chef? Or would there be someone in between?

K.S.: No, no, straight to the chef, because she was the cook. He would have had jurisdiction over the scullery maids, but there would be someone else there. Because you see, they would be in another room, preparing all the vegetables. I remember her saying when they had these big do’s, they used to put all these new potatoes in a sheet, and shake the sheet to get most of the skins off, then finish them off. The girls would finish them off.  And she said, of course, with all the stoves going, “Oh,” she said, “those floors were really hot. Did my feet in!” she said. She wasn’t very good on her feet (in later years). So you can imagine, with those hot floors, all day.

The ruling has always been that the staff were never seen. So the housemaids and those people would be doing the rooms downstairs before 8. They’d probably be up at 6. Then when Lord Sackville and his wife and so on came down, then the staff would be upstairs finishing off. They were never to be seen, ever. That was quite clear, my mother said that. They had 50 indoors and 50 outdoors staff. The outdoors staff weren’t estate workers, they were the gardeners, the handymen and those sort, not estate workers as such.

And your mother lived in, didn’t she? Did she talk about her quarters, her rooms?

K.S.: Nothing at all. She never said anything about that. She talked about the hierarchy, because in those days, you had the housekeeper and the butler, and of course in big places like these, you had several valets, and the kitchen staff and so on. And they all sat in their proper order. Status order. And I mean, when I went into service myself, at the age of 14, it was still there then. The status order, and I’m ashamed to say I was more or less at the bottom!

Did she give you any clues about the menus?

K.S.: She could reel off a menu straightaway to me. It was always written in French. And what I remember, but there may have been other courses, was there were the hors d’oeuvres, and then there was something else, but I’m not sure what, and she used to say, “Oh you could put an egg omelette in there,” then there was soup, and fish, and meat, and sweet, and then cheese and biscuits would go round, and then dessert, which would be all fruit. And when the fruit came, in some places, they brought the wine in at the same time, but other times they didn’t. The wine came in afterwards when the ladies left.

Housemaids were never seen by the family

K.S.: You have to remember too, they had private doors for the servants to go through, so they didn’t go through the main door, like housemaids who were cleaning, would come through a private door which might be part of the panelling, and they’d come out of there and do their job, and go back.

I love that, when that happens, because that’s where the phrase: “coming out of the woodwork” comes from.

K.S.: Absolutely, that’s a good phrase. Because I said they were never seen. And they had to do their work without making too much noise.

But you never went in…I mean, housemaids didn’t go in if the person was still sleeping there in the bed. What did you have to do…did you have to wait, and tap on the door?

There was a lot of waiting about then?

K.S.: And yet, they never wanted you ever to not be doing something, for your money. And as I said, the ladies’ maids did the making of clothes and the alterations. And it was rather funny because my mother talked about these dresses, and she said, “Oh the ladies’ maid was up all night taking the braid off, and all the various things, and putting new on.” And I said, “What are you talking about?” And then I realised that the actual dress itself was in a sense, permanent, and it had different feathers and trimmings on. So that was the ladies’ maid’s job.