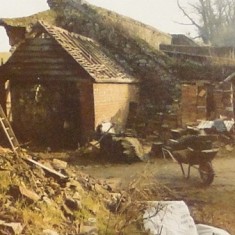 The former bricklayers' yard, before it became the tea-room yard
Photo courtesy of Alan Grubb 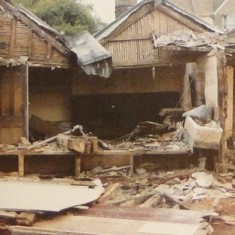 Vic Paler has been visiting Knole for many years with his family. His wife’s aunt, Miss Morley, lived and worked at Knole as a National Trust guide from 1946. He recalls how the guides lived, a ghost story, and the consternation caused by one particular suggestion for improvement…

Right I’m here with Vic Paler, who I hijacked in the Green Court this morning, this is Nicky Stitchman, and Vic was just telling me he was looking for the estate office because his wife’s aunt, is that correct?

Used to actually work here and was a volunteer, so Vic can you tell me more?

V.P.: She was actually… well there were three permanent guides here, and I think she must have joined almost as soon as the house opened, because she was here from ’46 to when she died.

And what was her name, Vic?

So there was Miss Morley, can you remember the names of the other two ladies?

V.P.: Yes, Mrs Greaves and Barbara. She was a Yorkshirewoman but I can’t remember her surname and in fact I think she was here… well, I don’t know, you lose track of time when you get old! But I think, one of my relatives came here and she was still pottering around, I don’t know, it must have been ten years ago or something like that.

And she actually lived here?

V.P.: Yes, all three of them actually lived here, in their own bedrooms and that.

And they came for the National Trust or were they here before?

V.P.: No, they came with the National Trust when it opened up as National Trust. I can remember how horrified how all these…  I wasn’t present, my parents came down, they’d heard about Knole and they joined and motored down and had tea with the guides, and Auntie Queen, and I can remember my father saying, ‘I suggested at the table that it would be a good idea if they opened a tearoom here’. I mean in those days you had conducted tours round and that was it, and he said, ‘The horrified expressions on everybody’s face! “Tearoom? Oh surely not!’” It was quite extraordinary.

How funny! Because obviously now it’s such a big thing, tearooms.

V.P.: Oh yes, I can remember walking around the park, in fact there’s a… well how true this story is I don’t know, but I believe there’s a cottage in the grounds which was originally outside the grounds, this’d be way back in the English Civil War times, when it was a pub, and there was a public road running by and, this is how the story goes, there was a chap who, fleeing from the roundheads maybe, had a bag of gold on him, and he, reputedly, and he was murdered and thrown down the well. I think it then became a gamekeeper’s cottage and if you disturbed the area around the well, it would arouse the ghost and there’d be people working out in the garden and they’d look up and there’s somebody looking out at them.

Really? And so it hadn’t been in the grounds, it was moved into the grounds?

V.P.: Yes, when they sort of acquired a bit more land.

V.P.: And when we visited… I can remember the children’s faces, you know, because they were… well I suppose they’d just started school, that sort of thing, and the couple who lived there were telling this story and they were going to move because of it.

Really? So they believed there was something there?

V.P.: He was dressed in a long cloak, and, you know, a pointy hat or something.

So a cavalier’s wandering around the grounds of Knole then!